Not every music producer is lucky enough to have a big, dedicated studio space. In fact, many artists, including chart-topping hit-makers, started as bedroom producers working in a small room. Creating great sounding music is possible in any space or studio, but there’s two main problems to overcome when producing with studio monitors in a small room.

First, it can seriously mess with acoustics, particularly the low frequencies. Low frequencies are longer sound waves, which, if they happen to be longer than the dimensions of a room itself, can bounce off of walls and interfere with the perceived bass response. This can make mixing a track extremely challenging.

The second problem is more of a practical issue – less physical space means you may need monitors that take up less real estate. It’s natural that you’d opt for a smaller monitor in a small room, as you don’t need a monitor with a large LF woofer. But even with smaller monitors, some are more compact than others and more suitable for close-up work.

I’ve collated five of the best studio monitors for small studio spaces below.

For information on what to consider when recording, mixing, mastering or manipulating audio in a small room, skip to the end of this article. 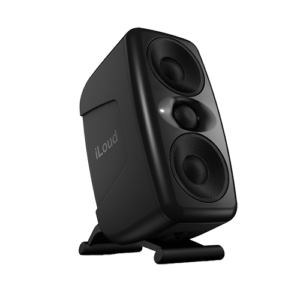 The IK Multimedia iLoud MTM’s are super compact, surprisingly light, yet super powerful – a real feat of engineering. With two 3.5″ woofer and a 1″ tweeter, they measure 10.39″ (height) x 6.3″ (width) x 5.12″, making them overall the smallest monitors on this list. But these are no budget monitors – they offer real quality.

With an incredibly flat frequency response, the iLoud MTM’s are designed to compete with much larger monitors (in their own words: ‘5″, 6″ and even 8″ monitors), and they really do compete. Despite their size, they have a bass extension down to 40Hz and sound clear and punchy in the low frequencies.

The iLoud MTM includes built-in acoustic self-calibration, meaning through its ARC reference microphone it will automatically adjust to your studio environment. This is an incredibly handy feature if you’re using monitors in a small, untreated room that isn’t setup like a professional, acoustically treated space. If you’re after studio monitors for a small room, you can’t go wrong with the IK Multimedia iLoud MTMs. 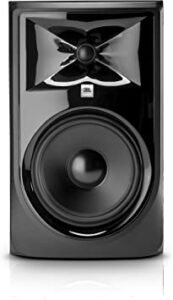 JBL LSR305P MKIIs often get overlooked in favour of Yamahas or KRK Rokits when small, budget-friendly studio monitors are considered, which to be honest is unfair on JBL. The LSR305s are highly rated by both critics and users alike due to their build quality, wide sound stage, built-in EQ options and outstanding value.

Perhaps the disadvantage of the LSR305s relative to a few other small studio monitors is the bass response, which can struggle at a high volume (80dB+). It is, however, extremely unlikely you’d need to be cranking the volume at these levels in a small room. For compact studio monitors on a budget, LSR305P MKIIs are a real contender. 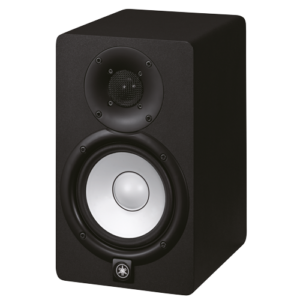 The Yamaha HS range really is fantastic value – perhaps even the best range of budget-friendly studio monitors out there. The HS5 is the smallest speaker in the HS series, with a 5″ LF woofer, 1″ dome tweeter and a frequency range of 54Hz to 30KHz. What makes it such a popular monitor is how flat it sounds, i.e. it minimises artificially boosted or altered responses across the frequency spectrum.

I recommend Yamaha HS5s for producing all kinds of bass-driven music such as hip hop and EDM. The low-end is flat and clear for a speaker at its price range, unlike many other small monitors. Some argue the HS5’s bass response doesn’t pack enough punch, but the reality is you want a flat low-end to really hear and craft your sound so you can make music that sounds great on any speaker. If you’re worried about honing in on your bass, purchasing some studio headphones to cross-reference your audio might be a good idea, rather than buying a subwoofer to boost your low frequencies; this will exasperate the long sound wave issues you can experience in a small room. 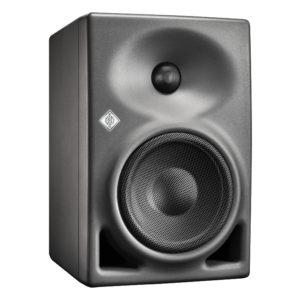 Neumann is renowned for its professional microphones, but its foray into studio monitors has proved successful, with the KH 120 A monitor no exception. This speaker is compact, measuring 10.87″ (height) x 7.12″ (width) x 8.62″ (depth) but carries a punch with its 5.25″ woofers.

The KH 120 A is cited by users and critics as remarkably neutral, offering a flat frequency response from the lows up to the highs. Sound engineers often couple a pair of these monitors with a high quality subwoofer, but I genuinely think there’s no need in a small studio room, though it is an option if you move to a large space in the future.

In terms of its build, the KH 120 A is encased in an aluminium cabinet, protected by metal grilles and yet only weighs 6kg, making it both durable and portable – a monitor designed for the long-term. Overall in its price bracket there’s a strong argument to be had that it’s the best compact monitor for accuracy, sound quality and build.

The Focal Twin6 Be is the highest grade speaker on this list, with an unparalleled sound stage and extreme accuracy, even at very high sound levels. What makes the Twin6 Be different from other higher-end monitors is its two 6.5″ woofers (one covering a broader low-mid frequency range band, the other solely focusing on the low frequencies – or you can customise the setup) with a reversed dome tweeter sat in between. In tandem, they produce a rich, transparent sound, with an impressive range of 40Hz to 40kHz.

Measuring 9.81″ (height) x 19.69″ (width) x 13.38″ (depth), it’s slightly larger (and heavier) than other monitors on this list, but can be setup either horizontally or vertically, giving you options to best make use of limited space in a small room. If you’re a music producer or sound engineer looking for a professional-grade monitor that looks great, sounds great and can be customised to cater for a studio with spatial limitations, these monitors would be a smart investment for the long-term.

What else should you consider for small studio spaces?

As well as investing in a quality pair of monitors, you should:

Do I need studio monitors in a small room?

In short, yes. If you’re producing or manipulating audio as an artist or engineer, studio monitors are probably the most important piece of kit you’ll have. You can have all kinds of synths, keyboards or other instruments, but you’ll never experience them properly acoustically if you don’t have monitors up to the task, regardless of the space you’re in. Even in a small room, a quality pair of studio monitors is vital – you just need to be aware of the limitations of your space and setup your monitors in a way that negates these limitations as much as possible. The studio monitors on this list all have various configurations and options to help you achieve this.

What’s the difference between studio monitors and normal speakers?

Whereas normal, consumer-marketed speakers aim to provide an enjoyable listening experience, studio monitors aim to provide an honest listening experience. By this I mean normal speakers may boost certain frequencies and gloss over imperfections in audio. When you’re recording, mixing, mastering or manipulating sound however, you need to be able to hear all imperfections and intricacies so you can address them. Studio monitors aim to provide a flat frequency response, meaning no frequencies are deliberately boosted or depressed across the entire frequency spectrum. Of course, all the different models and manufacturers of studio monitors on the market have different abilities to do this.